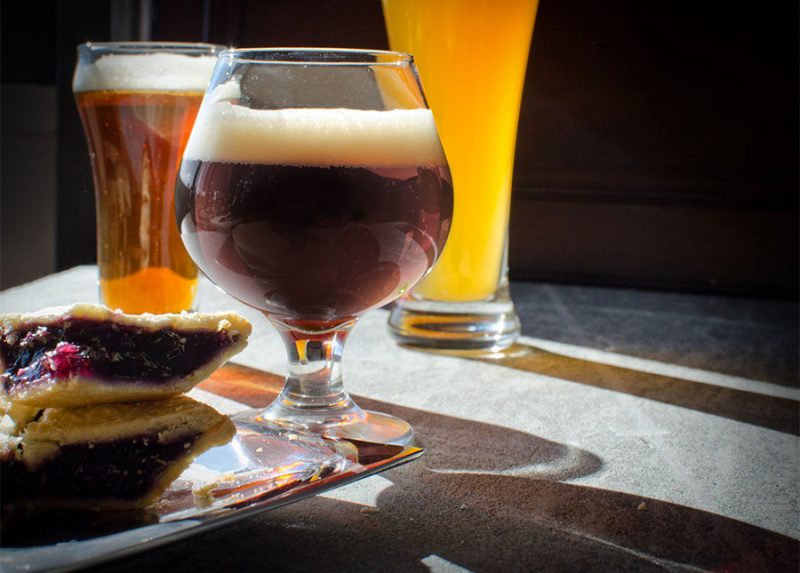 All good dessert recipes deserve a good story. Surely you’ve got a memory you can dig up somewhere of baking your grandma’s sacred family cookie recipe or the first time you properly executed that pineapple upside down cake (Bravo!).

The same goes for Charlie Papazian’s fondness for pies. Before he started spreading the love of homebrewing and independent beer, Papazian spent his career teaching kindergartners how to sound out the alphabet and identify shapes and colors (he has always loved to teach and share his knowledge, after all).

Many years ago on his birthday—January 23—he asked his tiny students to request that their parents make and bring pies for a birthday celebration and, lo and behold, dozens of pies showed up. He was impressed. So impressed, in fact, that he ended up starting the Great American Pie Festival and the Great American Pie Competition in Boulder, Colo. His love for pies even went a step further when he submitted January 23 as National Pie Day to Chase’s Calendar of National Events in the late 1970s.

This pie is one of his classic pie recipes that pulls its sweetness from fruit and honey rather than sugar. After judging many pies, Charlie began to see the value in natural sweetness. Enjoy!

For the pie crust:

Step 1: Preheat oven to 425° F while you prep your dough and filling.

Step 2: Put flour, water, and about half of your bu­­­­­tter into a food processor and pulse a few times. Add the rest of the butter and pulse about 6–7 more times. Take ice-cold water (without ice cubes) and add 5–7 tablespoons evenly to the mixture. Pulse again until the dough just barely holds together. Empty the dough mixture onto a clean, dry, flat surface. Do not knead the dough: this makes it tough, which is not ideal for pastry dough. Instead, roll the dough into one big mound and then split it into two separate mounds. Wrap the dough mounds in plastic wrap and place in the refrigerator for 1–12 hours.

Step 3: After you’ve allowed the dough to rest, take it out of the refrigerator and let it warm up for 5–10 minutes. Sprinkle some flour on a surface so that you can roll one of the mounds out into a 12-inch circle about 1/8 inch thick. Take the rolled-out flour and line a 9″ pie pan. Pinch the flour down around the sides of the pan to make a crust.

Step 5: Roll out the other mound of dough the same way that you prepared the shell crust. Lay over the top of the berries and pinch crusts together to seal along the edges. Use a bit of aluminum foil to wrap around the edges of the pinch crust so they don’t burn in the oven.

An English brown ale is simultaneously simple and complex in flavor, much like a classic blueberry pie. The tart sweetness from caramelized blueberries is a great complement to the subtle bitterness in an English brown. We all know there is nothing quite like a perfectly baked pie crust, which in this case pairs particularly well with the malty sweetness of the brown ale.

If you’re planning ahead, brew this English brown ale featured in The Homebrewer’s Companion by Charlie Papazian.

Sparge with about 3–4 gallons (11.4–15.2 L) of 170°F (77°C) water. Add more water (do not over-sparge) to brew pot to make an initial extract volume of 6.5 gallons (24.7 L) Anticipate evaporation of slightly more than 1 gallon (3.8 L). Add boiling hops and boil for 75 minutes. Then add flavor hops and Irish moss and boil for an additional 15 minutes. Total boiling time is 90 minutes. Turn off heat. Add aroma hops and let steep for 2–3 minutes before removing hops and chilling the hot wort.

Hailing from the South, Millie Shamburger has developed an affinity for the beer industry and all the shiny things that come with it. When not exploring beer, Millie is in the kitchen, enjoying the outdoors, and wearing out her dancing shoes.